Our Trip To Gloucester – Cyan

First thing on Tuesday we  bustled into 2 fancy Coaches.

When we arrived we  journeyed in a swarm to the mosque .

Just then something magnificent caught our eyes, it towered over us making us feel small.  It was a beautiful, stone mosque with elegantly carved domes on the roof.  The roof also had two golden crescent moons decorating the domes.

As we went inside, we were told to take our shoes off, so as not to ruin the soft, deep sectioned carpets.  As we went upstairs, we felt excited about what was to come, and we looked down from the tall windows at the street below. On entering the room, we got our own prayer mat which was beautifully patterned, and we noticed that they were in the shape of a green doorway.  The Imam of the majestic Mosque told us about what religion people practiced in the mosque, and how their books in Arabic went from right to left, so they started at the back of the book.  We learnt that people don’t always wear like his, but can come to the mosque on Fridays in all sorts of clothes,

We split into 3 groups, one group had a question and answer session, one group dressed up in traditional Muslem clothes, and the other group did ‘Wudu’.  This means washing yourself before prayers.  When we got to try this, we got drenched.

After that we exited the mosque and walked through the town to visit the Roman Chamber.  We split into two groups: the Y4s went into the Roman Chambers, we went down steep stone steps into a dusty Roman stunning room.It was inspiring us to learn more.After that we went to look in the museum , we found the room with the roman stuff.Quickly we rushed to the sectioned of bit we peered down to see a dead body !   Inquisitively we rushed around the room. Eventually we got to the place,were we ate  our lunch after that we rushed to the coaches and journeyed home. 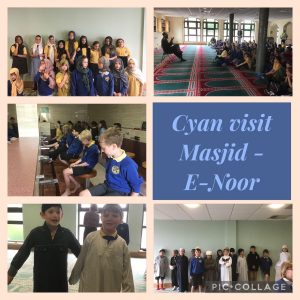