“Every young child is a scientist. They ask why all the time; they explore uncertainty; they touch everything in sight. Too often in a school environment they are not treated like scientists. Instead of creating, exploring, discovering, and reasoning like scientists, students consume, watch, verify and recall.” – Nikhil Goyal

“Science is a perspective. Science is the process that takes us from confusion to understanding in a manner that is precise, predictive and reliable– a transformation for those lucky enough to experience it, that is empowering and emotional. To be able to think through and grasp explanations – for everything from why the sky is blue to how life formed on earth – not because they are declared dogma but because they reveal patterns confirmed by experiment and observation, is one of the most precious human experiences.
Science is one of the greatest of all adventure stories, one that has been unfolding for thousands of years as we have sought to understand ourselves and our surroundings. Science needs to be taught to the young and communicated to the mature in a manner that captures this drama. We must embark on a cultural shift that places science in its rightful place alongside music, art and literature as an indispensable part of what makes life worth living. It’s the birthright of every child, it’s a necessity for every adult, to look out on the world…..and see that the wonder of the cosmos transcends everything that divides us.” – Brian Greene

As soon as our children step outside of the door, science surrounds them. It is in the car that they drive in, the iPad in their hands and the animals that they can hear. We endeavour to foster their natural curiosity; providing them with a dynamic learning environment and a stimulating science curriculum. In order to be more prepared for the advances in our ever-evolving scientific and technological world, Minchinhampton children will develop their questioning, critical thinking and problem solving skills. It is our hope that our children will be confident enough with scientific concepts and equipment that they are able to devise their own experiments outside of the classroom to answer the questions that they have about the world around us – in short, to realise the joy of finding out.

Minchinhampton aims to develop eco activists who respect all living things and admire the beauty of nature. We want them to be the children who protect what is almost lost and search for the answers to problems that need solving.

What our pupils say:

“Science is fascinating like maths.  Pinhole cameras and light is quite cool.  I’m looking forward to trying to take a photograph.”

“In science, I liked watching to see how the experiments go, like if this experiment doesn’t work, I will try again with something else or add something on.”

“We took apart owl pellets in science and found bones and what the owl had been eating and identified different animal bones by their features. We taped them down in our book.”

“We learnt about the digestion system. We did an experiment – we got a plastic bag and put in banana and cream crackers– then water for spit and orange juice for the acid. We mashed them and squeezed them down one leg of the tights– we squeezed out the liquids which represented nutrients. We learnt the difference between big and small intestines.”

“We have been learning about light. We made pinhole viewers out of pringle tubes. We coated them in tin foil to reflect the light away from the viewer. The viewers showed that light travels in a straight line — so you see it upside down on the viewer. We used our knowledge to make pinhole cameras which need to be light tight. The photographic paper absorbs light so you must be careful. We varied the distance from the camera and the time we left the hole open to find out the best outcomes.”

“I enjoyed making the pinhole cameras.  I found it fascinating how you could see a picture through the Pringles tube.  Our camera worked out the first time.  I had to try bending over through 180 degrees to see the picture the right way up.  I like building stuff and doing arts and crafts so this would have helped me to build it. In Science we have been investigating forces (so far gravity and friction). We asked questions like ‘why doesn’t the flag fly on the moon?’ and ‘why do astronauts bounce when they walk on the moon?’ We did a crater experiment using flour and weights. Science is super fun – I wish there was more of it.” Yr 6 2020

“I belong to STEM club and I have enjoyed the science bit where we made potions which exploded and it was fun!”

“I wasn’t too impressed when I first found out that I had to dissect an owl pellet, but it wasn’t long before my partner and I got really into it and were so impressed with the bones and skulls we found. I couldn’t believe how many creatures the owl had eaten!” 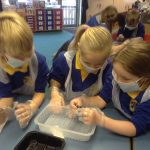 “I enjoyed the owl pellets lesson because it was a gruesome lesson. I don’t know many schools that would let their pupils dissect owl pellets and look for bones belonging to the prey of a barn owl!”

“I have also enjoyed the Science lessons where we mummified apples and got to see whether or not they rotted in the different substances. It was gross to see the final results! I like the fact we get to do our own experiments in class and find out the results for ourselves rather than being told them.”

“Learning about micro plastics in Science week was fascinating. You got to learn about how we need to cut back on our plastic use. Who knows what will happen if we don’t cut back now?”

“I really liked science week, it was one of my favourite weeks in school, especially when we took all of our work into the hall to show the rest of the school.  We designed a sun cream bottle that was totally biodegradable.  It was made from hollow bamboo from China.  The sun cream inside the bottle didn’t have any micro plastics in because these can escape into the sea and damage the animals.  Also in science I really enjoyed the time that we made the room dark and used mirrors and torches to make an experiment—our experiment was to find out how far we can make light bounce to.  We shone the torchlight on one mirror and saw how many mirrors it would bounce on to.  We also tried to recreate the Pepper’s Ghost illusion.  This kind of worked because we made a pencil look like it had changed its length.”

“I really liked going to the Living Rainforest and finding out about how humid and hot it was, and comparing the temperature in England and Brazil.  I have learnt about lots of animals that live in the rainforest.  The rainforest would be a good place to do a photography tour but maybe too hot to live.  On the trip  I was lucky to get a picture of the sloth dangling.  I really like watching the animals as they roamed about.”

“I liked the making the video in science and learning how the eye works.  In our video, we show people how the eye works and then show them how to make a pinhole camera and what one looks like.  Then we show them how light works and how we see things.  It was fun to work with the children in my group because they are good at suggestions and listening to my ideas.”

“I like doing science because at the moment we are doing light in science and last term we did a science week when we learnt about the seven types of plastic and 4 scientists came in who were doing their PhDs and it was really interesting learning about micro-plastics.” 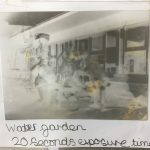 “I was really proud of our group’s pinhole camera—ours was the clearest.  When you looked through it you could see the image and colours easily.  Because the image reflects off the back of the camera, you see it upside down.  One of the challenges that we had was that we couldn’t get the pin through the bottom.  When we finally did we had loads of dents in the bottom which made the image unclear, we were able to fix this and sharpen the image using duct tape.”

“This year I loved science week because it was fun making all of the poster with my friends.  We were given the challenge of designing a new sun cream bottle and teaching other people about plastics.  Our group won the challenge and went to SLG to find out more about science and show off our posters to the people who gave us the challenge.”