We are concerned that the standards-and-accountability ‘movement’ by its very nature and in practice, despite some perhaps laudable intentions, ends up acting like an elaborate sorting device, crudely separating wheat from chaff. The ‘British Education system has placed ever increasing emphasis on academic testing….this is a manufactured race where the winners and losers can be predicted from the moment they are born.’ Major and Machin 2018

We would like to see an education system which puts more faith in people and their creativity. Until that day the system will always be in danger of putting a ceiling on people’s potential (the very potential it claims to want to maximise) and on their hope. We think a change in thinking is required. ‘No great improvements in the lot of mankind are possible, until a great change takes place in the fundamental constitution of their modes of thought.’ -John Stuart Mill, 1859. We keep coming back to that word, ‘trust.’ ‘To assume the best of someone is the trait that has created modern society. Those occasions when are trusting nature gets violated are tragic. But the alternative – to abandon trust as a defence against predation and deception- is worse.’ Malcolm Gladwell- Talking to Strangers.

We are also concerned at the ‘movement’s’ knack for both narrowing and stultifying the curriculum.“How could you give me life, and take from me all the inappreciable things that raise it from the state of conscious death? Where are the graces of my soul? Where are the sentiments of my heart? What have you done, oh, Father, What have you done with the garden that should have bloomed once, in this great wilderness here? Said Louisa as she touched her heart.”- Charles Dickens, Hard Times

‘We have to go from what is essentially an industrial model of education, a manufacturing model, which is based on linearity and conformity and batching people. We have to move to a model that is based more on principles of agriculture. We have to recognize that human flourishing is not a mechanical process; it’s an organic process. And you cannot predict the outcome of human development. All you can do, like a farmer, is create the conditions under which they will begin to flourish.’ -Ken Robinson

We do not assume anything- and look to remain humble in the face of our growing knowledge because we still know so little. ‘How can a single human cell measuring 1/1000th of an inch across contain instructions within its DNA that would fill 1000 books of 600 pages each? The more we learn about the workings of the body, the more we realise just how vast is the intelligence at work within it and how little we know.’ – Eckhart Tolle, 1999

We would want to question conventional wisdom as well as radical alternatives; we especially want to question elements of the education system that are clearly driven by politics; we certainly do not believe that politics always delivers on what is good for our pupils. ‘Too much of education and other areas of social policy are really about power and control and being seen to be right’ (Debra Kidd 2019).

‘Our times are driven by the inestimable energies of the mechanical mind; its achievements derive from its singular focus, linear direction and force. When it dominates, the habit of gentleness dies out. We become blind: nature is rifled, politics eschews vision and becomes the obsessive servant of economics, and religion opts for the mathematics of system and forgets its mystical flame. Instead of true leadership which would be the servant of vision and imagination, we have systems of puppetry which are carefully constructed and manipulated from elsewhere. We never know who we are dealing with; hidden agendas operate to deepen our insecurity and persuade us to be hopeless.’ – John Donahue, 1978

We remain unconvinced by a model of education reform and development built on the principle that market forces are the most effective driver for improvement in education. Competition always relies on there being winners and losers which is fine in a game of football where valuable lessons can be learnt by both but not for an entire education system. As Debra Kidd stated in her book, ‘Teaching: Notes from the Frontline’, ‘where successes emerge… they lie in equality and in the belief that all can succeed.’ In this respect we need to question our over-dependency on exams. ‘Would we rather have a generation of children who become literate or numerate eventually or a generation where some do and some don’t. Would we rather have a nation of resilient people who keep on trying or a nation of successes and failures divided by their performance on a single day of their lives? Would we rather have a system that offers second chances to all?’ (Debra Kidd, 2014). To remain true to our vision, I think it is necessary for us to define our own democratic (as opposed to meritocratic) definition of excellence.

Brene Brown (2012) asks some important questions about standards and comparisons in her book ‘Daring Greatly’: ‘Healthy competition can be beneficial but is there constant covert or overt comparing and ranking? Has creativity been suffocated? Are people held to one narrow standard rather than acknowledged for their unique gifts and contributions?’

We think we should believe in excellence for all with no child/ adult left behind. On principle we think we have to believe, have to hope, that all of us could be excellent in our own way. We think we should be determined to enjoy people’s endlessly varied skills, interests, abilities, knowledge and personality traits; to help true individuality to be freely and clearly expressed. For us excellence cannot and should not be an ever shifting gold standard which only some will ever achieve. ‘Human nature is not a machine to be built after a model, and set to do the work prescribed for it, but a tree, which requires to grow and develop itself on all sides, according to the tendency of the inward forces that make it a living thing’ (John Stuart Mill, 1859).

As an institution, we think we would define a school’s excellence:- -by its willingness for self scrutiny, ‘Scrutiny of our beliefs, motives and actions. Scrutiny of how our circumstances and self interest subtly directs our thinking. And how we often believe in the legitimacy of our own fears and resentments, while mocking and disregarding those of others to whom we feel ourselves superior.’ D McGarvey. -by its fierce determination to keep trying, ‘Don’t aim at success – the more you aim at it and make it a target, the more you are going to miss it. For success, like happiness, cannot be pursued; it must ensue….as the unintended side-effect of one’s personal dedication to a course greater than oneself’ (Viktor Frankl, 1946). ‘by its humble acceptance that it is not there yet and may never get there, “The more I know, the more I realize I know nothing.”- Socrates -as much by its individuality as by its commitment to all the individuals within it. ‘In this sense we refuse to see development as a quantitative accumulation of better and better grade scores; instead we see it as ‘the liberation of creative possibilities’ (Manfred Max-Neef).

We refuse to be seduced by simple answers, by the latest discovery or trend; by the temptation to label and reduce something complex and extraordinary to narrow, blinding formulas, seeing experiences in the classroom as ‘complex adaptive systems, characterised by growth, mutual influence and non linear connectedness.’ (Ricca in Debra Kidd, 2015).

Equally we do not want to reduce any of our children to a label or our school. We would rather judge ourselves by children who talk excitedly about their learning rather than an Ofsted grade. 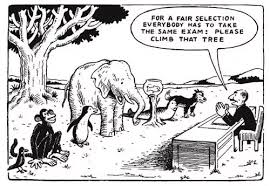 We are mindful that attempts made to measure excellence can lead to limiting definitions of excellence and betray the appreciation and promotion of individuality. Einstein said ‘Everybody is a genius but if you judge a fish by its ability to climb a tree, it will live its whole life believing it is stupid.’

We think we should look to develop methods of assessment and evaluation which are both significant and promote a sense of self-value. We are wary of the kind of data used to measure a child’s and a school’s worth. We sense that the ‘truth’ of the thing is somewhere between the lines and in the fleeting moments that make up our days; that we need to walk through these moments charged with a way of seeing that is ever open to possibility for all of us – adults and children alike. ‘Sometimes that which one hopes to explain is so fleeting and momentary that it is hard to justify as data. Yet it is in these moments that strong pivots take place- moments which, while fleeting, are so powerful that they shift a person or a group into a new trajectory of being’ (Debra Kidd, 2015).

We want to be motivated by the intrinsic value of what we do and the intrinsic value within the act of learning ‘…good values have to be grown from the inside out.’ Alfie Kohn. We want our pupils and all in our community to be enjoying ‘optimal experiences’ (Flow- Mihaly Csikszentmihalyi) and we believe it is possible both to meet standards and create authentic work—through the idea that children’s work should be honoured(see Ron Berger). ‘Once a pupil creates work of value for an authentic audience beyond the classroom – work that is sophisticated, accurate, important and beautiful – that student is never the same again’ (Ron Berger in Mary Myatt, 2018). We would like to respond positively to pupils’ individual works; for them to be a source of pleasure and interest.