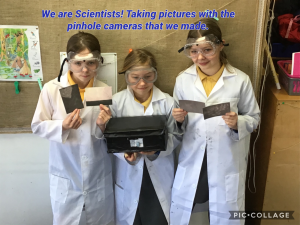 In science we have pinhole cameras. We had some photographic paper which we put in our black pin hole camera  box and stuck it to the back with blue tack. Then we put it on the step ladder  and the other person would take the blue tack off the aperture (the hole in the camera) and we would have to stay still for 25 – 40  seconds then we would take it back to the dark room

Then put it in the fixer for 2 minutes, then put it back in the water for 4 minutes then leave to dry.

What the chemicals do

The developer: the developer is the chemical that gets the image darker and shows the picture. The water: the water washes off all the excess developer before putting it in the fixer. The fixer: the fixer makes sure that when you take the paper out the image does not disappear.