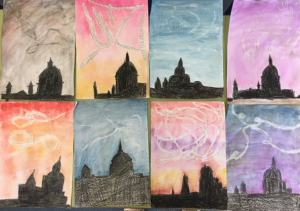 We did Henry Moore inspired wax resist paintings of wartime scenes.  It was lots of fun and with fantastic results.  I found that you need to rub the wax on quite hard for it to resist the paint.  We painted over the wax using a water colour wash.

This week in school we have been to a handball tournament. A few year 6 boys went to the AstroTurf outside Stratford Park and we played in a group of 10 boys. They were a seven aside matches and there were 3 subs. The match rotations were, you’d play 1 team then go to another and so on. We were in a 5 team group, including us, and we played (in this order) Thrupp, Bussage, Bisley and Leonard Stanley. Everyone had an even amount of game time as each of us was a sub for 1 and a half games off. We weren’t all off for 1 game (and a half) at a time but overall each player had 1 and a half game time off the pitch. There was a lot of schools participating in this handball tournament but we were in a five team group (including us).

At the start of the competition the instructors gave us drills to do to get used to the game. Some schools had never been so it was just to get a little idea of what it was like to play handball. We then went into the first game which we were not playing in but it gave us time to practice our strategies. We then went into our first game where we won 17:1. We played super in that game and that was the 1 of 2 goals let in by our keepers. Next match we played Bussage which we won 5:1 and it was our toughest game but we still managed. The penultimate match we played Bisley and we won that match 10:0 and the final match we won 7:0. Overall we played very well as a team.

By Joshua and Jack 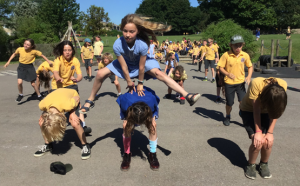 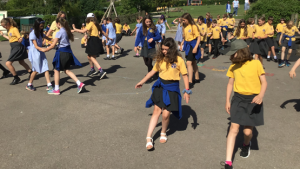 Oh wow, where do we start?  Minchinhampton have taken part in another sporting event.  This one was mountain biking at Stratford Park and the children that went were Devon, Ned, Amelie and Leo.  First off we took a practise lap by walking around the track which was quite difficult with some steep hills and went into the forest.  Next we started our timed relay races and this is the order that we went in: Ned was first, followed on by Leo, then Devon and finally Amelie.  We had so much fun and we ended up in fourth place on every round of six.  We started at 9:30 and finished at 11:30.

On Wednesdays after school and Friday afternoons, us year 6s have been rehearsing our production: Star Warts.  Today, we performed in front of the Year 5s.  They enjoyed it very much and boosted us to our A-game.  The Year 5s also gave us some positives and told us some handy tips for us to improve on.  They were really helpful.  As the script is very long, we only got to perform the first third to the Year 5s.  Those of you who are lucky enough to see this play – you will love it!