Well, Christmas is over and we are all back in class and learning loads in Royal!

In English we have been learning about the story called The Clocktower.

It’s about a girl called Belle who wants her freedom in the outside world. We are learning to do a powerful setting description for The Clocktower, a retell and make story maps.

In Reading we’ve been reading The Firework Maker’s Daughter where the main character, Lily, goes to get The royal sulphur to prove to her father that she is a firework maker.  She forgets the magic water from the Emerald Lake so she might get burnt! We haven’t read it all but it is such a good book so far and we love it!

In Topic we’ve been learning about rivers – we don’t know much yet! Our teacher’s been testing our brains with elicitations like “what’s an oxbow lake or what’s a Delta or a floodplain?” but we are going to learn it.  We have started drawing a diagram of a river and its parts today!

In Science we’ve been learning about electrical circuits and testing them.  We’ve looked at toys with batteries and electrical components and also our teacher brought a plasma ball into school and we used a fluorescent light to play with it and light it up.

in Computing we’ve been learning to make movies using Moviemaker.  We are working hard to make a Met Office flood warning film.  We first Use Padlet to film videos and then download it.  We then upload it to Moviemaker to edit and make films.  It’s so cool what you can do with  Moviemaker – it’s amazing!

in Art we’ve been learning about Stephen Wiltshire and all his amazing artwork.  His nickname is “The Human Camera” He is like the best artist ever because his art is so detailed (in fact he was autistic when he was young so he couldn’t talk so he communicated using drawings and he made a book and sold it for over £2000 at the age of seven – amazing!) The teachers didn’t know how he did it. They tried to research it but they just found out nothing – they thought he’s just completely best artist.

We’ve been getting into groups and practicing strokes in swimming.  We haven’t done much yet but we are about to do it because it’s tomorrow a.k.a. Thursday.

The Best bit was when we went on the bus and when we went in the water it was just so fun.  We are Stages 2 and 3 at the moment.  We all practise to get into the next stage up and keep getting better at it.

In PE we’ve been doing gymnastics and I think today (A.k.a. Wednesday) will be getting out the apparatus!  Yesterday we did games and tennis doing tricks and rallies! It’s so much fun and we hold the ball on the tennis racket whilst running and we do loads of keepy uppies with the tennis balls. We do all different kinds of things as well like cross the golden river and zombie tag. I can’t believe the zombies never found me until basically the end. We also played chaos tag – it’s basically where everyone’s it and if you tag someone at the same time as they tag you, you have to do rock, paper, scissors and the loser goes down and the winner stays up.

in RE we’ve been learning about Hinduism and all about the gods that Hindus worship.  We learned about their religious celebration of Diwali and the Puja plate where you put offerings for the gods like murtis and food and water and flowers. When they go to Hindu temple (Mandir) they perform a special ritual called Arti to the gods.  They pray to the gods for like strength or Intelligence and they believe that the main God Brahma is in everything and if they be good in their life their next life will be better (Karma).

Bonjour! We’ve been learning about all the equipment you need in the French school like un regular – A ruler and un gomme – A  rubber and many more!

and white is Blanc and grey is Gris and green is vert and orange is orange.  Our French teacher Mrs Chard brings in a guinea pig (a fluffy one not a real one!) called Coco who is so cute! 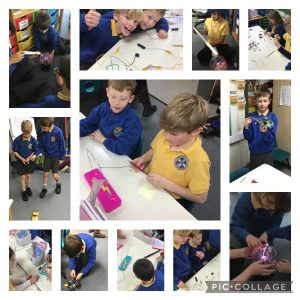 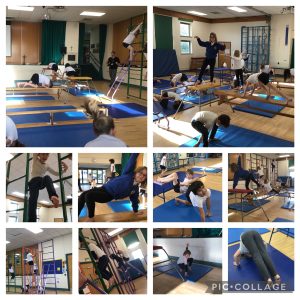 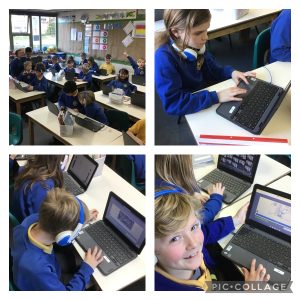