Special Visitor in Years 5 and 6

In geography we have been learning map and navigation skills.  We have also learned about Ernest Shackleton’s expedition to cross the South Pole.

After his talk, we asked some questions.  Here are his answers:

What was the best / scariest thing your grandfather saw?

The week of rowing to get to Elephant island: their gloves were frozen to the oars.  James Wordie didn’t change his underwear for 6 months!

Did your grandfather go on any other expeditions?

To the Antarctic twice and the Arctic several times.

Did he play an instrument?

Yes – the bagpipes – but he didn’t take them on the expedition.

Do you know who was attacked by a leopard seal?

What place did he come in the dog sled races?

Did he have a favourite type of rock?

Actually he was most interested in ice – in glaciers which he studied too.

By Hollie, Charlie, Oscar and Edward 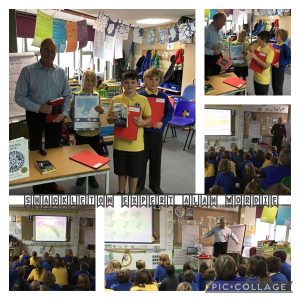