In our previous science lesson we used types of clips to represent bird beaks and saw which object worked the best. The beaks we used were tweezers, pegs, spoons and scissors. We found that paper clips were the easiest to pick up out of pencils and treasury tags.

In maths we have learnt how to do long division and how to simplify fractions. It was hard at the start but with a little teamwork we all got the hang of it.  We simplified fractions into both decimals and whole numbers. We got to choose if we wanted to do long division or short division method with a two digit divisor . The majority of the class chose short division because they found it a lot more simple. This current week we have been doing angles. We have been adding angles and making them into 360 degrees and 180 degrees.

In P.E we have been doing tag rugby and hockey. Tag rugby was the first sport we did. We did a few matches in groups of four and then we did it with the whole class. Our P.E teacher Mr Tovey made sure that everyone was being fair while having fun. Everyone was happy about the progress they made in tag rugby. In hockey we did some dribbling and also a game called rob the nest and lots of other skills. We played a couple of matches. We also did indoor PE with Mrs Wilson. We did African dances and lots of different exercises, adding on to that everybody had to perform a dance that they had made up .

In our most recent English unit we have been learning about Macbeth, which is a story about a King, Queen and his cousin but I won’t go into that at the moment anyway we have been doing free writing which everyone loves doing. At the start of this unit all the y5/6 teachers put on a play demonstrating how the story went. On another page of our English book we recreated a paragraph of the poem “The Jabberwocky” and acted it out. When we wrote our poem we made up some nonsense words and a glossary to support our use and created our own Jabberwocky character. A couple of days ago we drew a scene from Macbeth and wrote a poem about it.

In Topic we have been doing coordinates. We went on our field and did a treasure hunt  and recorded the clues as six figure grid references. In a few days we will be plotting the Shackleton route  on a map, using our skills for our presentation book.

In art we have been doing perspectives which is a road that eventually gets to a point where it looks like it never ends. We used our artistic brains  of primary colours and colour mixing. To copy a famous painting by Hobbema. This painting has an example of the use of perspective landscape.

On Friday(18.11.2022) we did outdoor learning. The first thing we did was do some compass work. Just before break we went over to a man and he taught us all about fire and what chemicals/objects we use. After break we set fire to a cotton bud in groups of 4 to make sure everyone stays safe.

We hope you enjoyed reading!

By Ava and Lexie 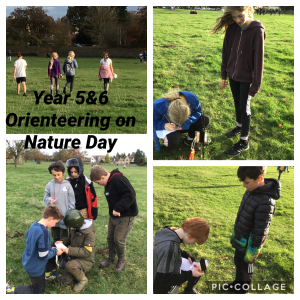 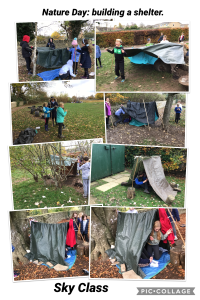