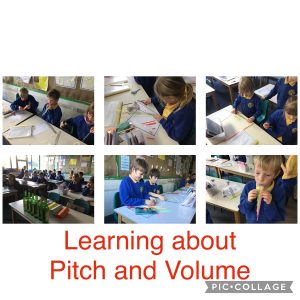 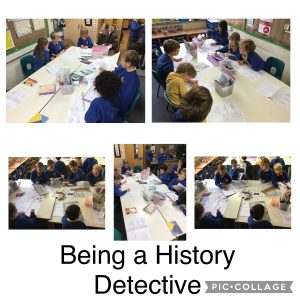 We have continued to be really busy in Royal Class and have had lots of fun!

In English we have been doing boxing up and writing our own Beowulf story.  This is my example:

Many moons ago in a bleak rainforest, two monstrous demons named The Devil and The Cracker stalked the black forests. On the edge of the boundary line, a foolish King built his castle.

In History we are learning about Vikings and what they look like and who they are and how they travelled across to our country.  They travelled in a Viking Longship. Today we are going to be making our names out of runes using string and then gluing them on to a piece of cardboard for our presentation boards.

In Indoor PE /dancing we have been doing the Just Dance version of Believer from Imagine Dragons. We are going to do the dance for a “dance off” with the other year 3/4 classes (Sapphire and Cyan) which is going to be so much fun!

In French we have been doing body parts (Head, Shoulders, Knees and Toes) It’s a good game but when it’s in French is much more fun and every time you do it you have to take away another body part.

In PSHE we have been talking about the differences in people because all people are not the same and it’s very fascinating because we get to see how many things they have in common and how many they don’t.

In Spelling we’ve been doing “look, cover, say, write, check” and it’s really fun because you’re only up against yourself and not anybody else. On Wednesday in spelling we got given a sheet which had words on it and the words were split into three syllables but jumbled up and we had to put them in the correct order to spell out the correct word. It was fun!

In Music we got to play with the glockenspiels and it was fun because at the start of the lesson you have five minutes of our own time just trying to make your own tunes. We learnt a song called Let Your Spirit Fly.

In Computing we got to make our own little animation with three Viking ships in Scratch. They all go different ways, make different sounds and announce different things by following our algorithms. The Norway Vikings went to Ireland, the Swedish Vikings went to Scotland and last but not least the Denmark Vikings went to Northeast England.

In Science we did a little challenge that Mr Ricketts set up for us. It was challenging but we got there in the end! So, the challenge was that there were six bottles which Mr Ricketts put up for us with covers on and we had to guess the amount of water that was in each one based on the sound they made when they were blown into.  We had to put them from the smallest amount of water up to the biggest amount of water. We managed to order it right in the end.  We learned that different pitches are made when the vibrations are short (high) or long (low).  The volume gets louder when more energy is in the vibrations.

Reading is so fun because when Mr Ricketts reads us Varjak Paw out loud we get a copy of the book and we read it silently in our heads. The other Guided Reading is about us getting a copy of the first chapter of a good book and we get the questions on the front cover of the book. Then we have to answer them in our guided reading books by finding the evidence.

Art is so fun because we get to make silhouettes of fairytales or animals or objects and then we paint a colourwashed background for our silhouette. I personally like it because we get a great teacher (Miss Tonner) teaching us Art.

Well, in DT we will get to make bread and taste it and see if it’s really good. So far we haven’t done any baking YET but we’re going to start finding out about it today!

In Outdoor PE we get to play netball and rugby and it’s so fun.

From Tilda, Olivia and Audrey