Recently we measured friction with Newton meters.  We were testing how many Newtons it took to pull an object on different surfaces.  At first I was reading Newtons wrong but my team helped me to get it right.  Writing down the mean from the 3 conclusions was easy: we added the 3 together and then divided by 3.  I would really like to get better at rounding the mean after figuring it out.  I felt really proud once we were done and I wanted to do it again.  Tom
When we did our compass work, I worked with Thomas.  I found it hard and somehow we ended up halfway across the field!  I want to try and get better at working out which way to go.  Daniel
Last week I went to the girls’ football festival with my friends.  It was so much fun and also quite challenging.  We played about 5 matches against other schools’ teams.  We won 2 matches, drew 2 and lost 1.  The challenging part was trying to trick the opposite team and using our best skills with dribbling and scoring.  We got better by the minute because we practised our skills at the start for 45 minutes.  I found it easy doing a goal kick because I could boot the ball really high.  Darcy
We have been doing landscape painting.  We had to do some washes and blend the colours.  I found doing the shadows quite tricky.  I got better at this by doing some drawings at home.  I found drawing some parts quite easy because I love drawing them at home.  I would like to get better at blending the colours in the sky.  I felt really proud at the end.  Maddie
This week we are rehearsing a play called Macbeth.  I am Lady Macbeth so the skills that I have to learn are: remembering all my lines, using a post accent and being dark and mysterious.  One of the trickiest skills was being loud in a post accent.  I got better as I practised at home and in every spare minute of time at school.  I would still like to get better at being on the stage.  I’m feeling nervous but excited today as I’m hoping it will get filmed today. Lauren
Last week I did the remembrance assembly.  It was me and Rohan, we had to put information on a slide to show in front of the whole school and the Royal British Legion.  It was challenging because we also had to perform a poem and didn’t have long to practise.  I think if I could do it again I would keep it the same because there were good compliments and it felt good when everyone clapped at the end.  Buddy 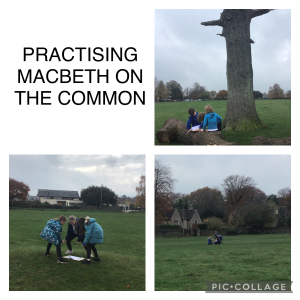