Art
We have spent the term looking at the work of the late illustrator Jan Pienkowski. He did a lot of work based around silhouettes. Some of his most impressive pieces have been based on fairy tales. In our final art lesson we were allowed to design and create our own version of a silhouette piece. We were given the choice to make the silhouette out of black paper or have a colourful one. Most of us chose to be traditional and make a black silhouette. The drawing of the silhouette was not too hard, but the cutting out was a bit of a challenge for some of us! Once we cut out the silhouette, we then stuck them down on backgrounds that we had created earlier in the week. We hope you agree that these final pieces look really effective. We are pleased with how they look and were glad to be able to do them.
RE
Last term we looked at what Hindus believe in. We learnt about the Trimurti – Brahma, Vishnu and Shiva. Together these 3 gods represent Brahman. We found it really interesting that there are lots of different gods and goddesses in the Hindu religion. We discovered that the Trimurti also represents the circle of life with Brahma being the creator, Vishnu being the preserver and Shiva being the destroyer. We talked about how the three gods work together to keep life flowing on earth. We then painted what we thought the circle of life would like, but we weren’t allowed to have any drawings/symbols. We were only allowed to use colour to represent our thoughts. See what you think – can you tell which colours represent creation, preserving or destruction?
History
So far in Vikings, we have looked at the invasion maps, their place on the timeline and how important longships were to them. Longships were designed to be long and narrow so they could travel quickly through the water. The planks were overlapping and to prevent any flooding and to ‘waterproof’ them, Vikings would fill any gaps with bits of animal skin. The ships were either powered by wind in the sail or by the 40+ Vikings rowing! To scare their enemies, they had a figure on the front of the ship (prow); this was usually in the shape of a dragon. The Vikings would use the longship for raiding, but also trading and exploring. They were skilled navigators and used the sun (during the day) and the stars (during the night) to find their way.
We are enjoying learning about the Vikings and can’t wait to find out more about the gods and goddesses they worshipped.
Sports afternoon with Mr Tovey
We were excited to discover that we had a sports afternoon with Mr Tovey this week pon top of our usual PE session. We played lots of different games to help us with our team work. Some members of the class found it difficult to work as a team so we have realised that we need to do more work on this. One or two of us commented that being selfish in a team game doesn’t end well. Hopefully with lots of practice and support, we can get there!
English
Last term we finished studying Arthur and the Golden Rope. It was a great book and some of us are keen to read the rest of the Brownstone Adventures written by Joe-Todd Stanton. This term we are going to be learning a retell of Beowulf and then be given the chance to write our own defeating the monster story. Although we have only just started learning the retell, we are very pleased with how it is going. We have to work as a team, meaning that everyone has to join in with both the telling and the acting. We have discovered that some of the class are very dramatic when it comes to retelling and they are definitely the ones who are the loudest! Over the next few days we will continue to learn the rest of the story and then be able to retell the whole thing together. Have a look at our story map; do you think you could tell the story using it?
Maths
We have spent time learning how to use effective strategies for adding numbers mentally and now we are doing the same for subtraction. Subtracting is a bit trickier for some of us, but we are allowed to use number lines, 100 squares and even our own fingers to help us. It is important to remember that equipment is a useful tool and can help us access the maths. We hope that as the term goes on, we will feel just as confident with subtraction as we did with addition. 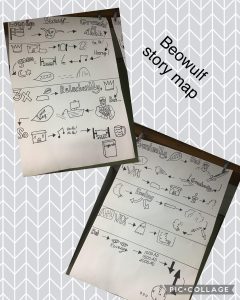 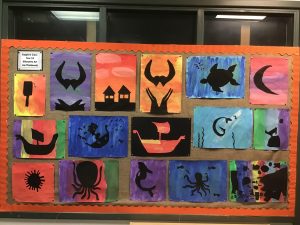