On Monday, we did gymnastics.  We practised our cartwheels and we also did our routines.  The thing I found challenging was walking on the bench.  I did a balance on it and it was tricky.  I was scared of falling off.  I got better at it because I focussed on a fixed point.  There is one thing that I want to get better at and that is front walkovers.  At the end, I felt really good because we got to show our routines.

I do Cooking Club on a Thursday after school.  We learn new skills like: knife skills, measurements and good hygiene when cooking.  It’s challenging when we have to learn something new. I got better at the tricky things by practising at home.  I found measuring easy because I do cooking at home and have to measure the ingredients.  I would like to improve my knife skills so I can be more accurate.  I felt really proud that I had made something to eat.

Yesterday in English, we all got to act out being part of Shackleton’s crew.  I was Henry McNeish (ship’s carpenter) and I had a fun part because in the story I made a big boat to get ready for the mission.  I was one of the five chosen by Shackleton on this mission.  Me and some others acted out sailing away while the rest of the crew were cheering us on.  We took a photo of ourselves on a bench pretending to be on a boat.  It was quite easy to pretend to sail away because we were just pretending to row a boat.  I think I could have done better at the rowing though!  It was fun to act in Shackleton’s crew and I can’t wait to do it again today!

This term in PE we have been doing gymnastics and tag rugby.  On Monday we do indoor PE, and on Fridays we do outdoor PE.  For me the most challenging part is the cartwheeling in gymnastics.  To do a cartwheel you need strength and you need to know how to do a bunny hop which I can do.  If I keep doing it, I can probably do a cartwheel in the near future.  In tag rugby, the easiest part was running with the ball.  I am going to keep on doing these things in PE so I can get better at it.  I felt relieved and happy in tag rugby that I could get lots of points for my team and run and pass with the ball. 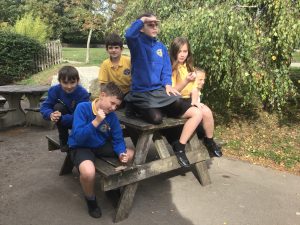 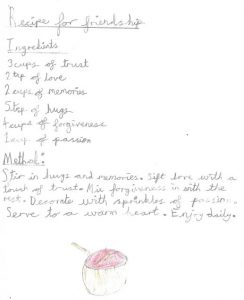