Sapphire Report from the Frontline

Science – Experiments!
We are learning what it is to be a scientist and one of the main things we need to understand is fair testing. We have completed 2 experiments now. The first was looking at which flat surfaces allowed a toy car to travel the furthest. We rolled the car along a wooden floor, playground, sand, astro turf and a PE mat. Most of us predicted that the car would travel the furthest on the wooden floor because it is smooth while the sand is a completely unstable surface and therefore did not allow the car to travel very far. Our next test was looking at how a toy car would travel down different surfaces on a ramp. The ramp had to stay the same height throughout the test, but the surface of the ramp could change; the 4 ramp surfaces were wood, foam, sandpaper and carpet. The toy car surprisingly travelled the furthest after coming off of the sandpaper ramp. We think this was because the car wheels got good traction on the sandpaper and stayed on course, while the wooden surface was too smooth and therefore the car could not get good enough traction and went off course.
We are learning words like variables, hypothesis, prediction and conclusion and have to be able to use them in our write ups of the test. We are looking forward to what our next experiment is going to be.
Maths – Number lines
This week we have been looking at different number lines. We started the week with creating any number line we wanted. Some of us went up in multiples of 10s, 100s or 1000s while others went up in their favourite times table pattern. One group decided to go up in 13s which was a bit of a challenge to do quickly. We have also had to work out different scales of number lines and look for mistakes in our Twist it tasks. In Y3 we are making sure we can count up in 50s while the Y4s have to count up in 25s. It is straightforward if you get to start from 0, but a bit more tricky if you start from any given number that is not a multiple of either 50 or 25.
English – Illustrating and acting
We are continuing to read our secret book (although some of the Y4s have a good idea about what it could be as it links to one we did last year!) and this week has been all about illustrating and drama. We had to read a short passage again after we had already had it read to us and then decide what the illustration should be. Miss Tonner didn’t let us see any of the original illustrations until we had completed ours. Most of us found that we were pretty close to the originals, and even if we weren’t, our drawings still represented the passage well. Later on in the week we used the same passages to do a little bit of drama. We had to recreate the moment the wolf attacks Arthur’s town and show how all of the villagers felt as well as how Arthur felt as a witness to the event from a distance.
Art – Jan Pieńkowski
We are looking at the work of the illustrator Jan Pienkowski this term. We love the fact that a lot of his work is silhouettes. This week we were told to ‘have a go’ at drawing some simple silhouettes and to see if our classmates could recognise them.  As the term goes on, we are going to be making our own artworks in the style of Pienkowski; we can’t wait to experiment with different colours and shapes.
History – Viking raids
We had a Viking day to introduce our topic at the start of term. It was lots of fun. We got to see real Viking artefacts and try some of them on. Since that day, we have started to look at where the Vikings came from and where they invaded. Did you know that they got as far as North America and that they used rivers to travel through Eastern Europe? We wanted to know which Viking group travelled the furthest distance from their country of origin. We used string to ‘measure’ the distance and then compared that piece of string to the scale in the atlas. The Danish Vikings had the shortest journey as they mainly invaded the east coast of England while the Swedish and Norwegian Vikings travelled much longer to invade and raid the west coast of Scotland and the south coast of Ireland.
PE – balances and travels
In PE we have been looking at different ways to balance and then combine the balances with different forms of travels. Some of us were very confident with the trickier balances and were able to add in a variety of rolls and fluid movements to move from space to another. We have discovered that to have a strong sequence, not only do we need to be sure of the gymnastic movements, but we also need to work well as a team. The groups who had the more successful pieces were the ones who had listened to each other, respected different opinions and compromised when needed. In the upcoming weeks we are going to work at putting our sequences to a piece of music like Ed Sheeran’s ‘Shivers’.
French – colours
We are very lucky to have Mrs Chard teach us French each week. We have learnt a few greetings and are learning about the french words for colours. We also had French day a few weeks ago which was great. We tried some French food, played French games and went on a hunt to find French words for different animals. We hope we get to have another French day this year. 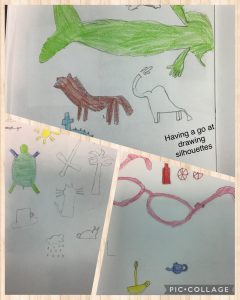