We’ve been so busy and have so much to tell you about since our last newsletter so brace yourselves for a long one!

In topic we went to Gloucester and we saw the Eastgate chamber and we went to see a wall they used to defend in Gloucester Back when the  Romans successfully invaded Britannia. They named it Glevum. The Emperor at that time was Emperor Nerva and he made a fort for retired soldiers there.

The book we are reading in  class is called When the Mountains Roared. It’s about a girl called Ruby and her dad and grandma.  They have come from Australia and moved to India because some people lent him some money for his hotel and they wanted it back as well as something else so they escaped to India and now her dad owns a different hotel. Ruby has a new friend called Praveen and he has two baby goats that he looks after and Ruby loves him because he is so adventurous.

In RE we have learned about Islam and we went to Masjid E Noor mosque and met Imman Hussan. Here are some facts about Islam.  Muslims pray 5x a day and they have to pay £2.50 out of every £100 of their savings.  They will go to the house of god at least once in their lifetime and pray. When they go to the Mosque they wash themselves.  It is called Wudu.

In Maths we’ve been learning about Capacity, lengths And measures. Year fours have had their MTC test and they actually wanted to do it some said! On our passports a lot of people have moved up. Some people Love doing exploring on the explore it questions!

In English we have been writing A script for horrible histories. So far we have written a script about The Romans coming to Gloucester and others. We are learning to use moviemaker in Computing to edit it.  Mr Ricketts let us make The script funny with jokes about anything we want! We are now writing a script about Roman soldiers in The Roman army for a advert to help people want to join the Roman army!

In DT we have been making food like tacos or burritos and fajitas. We had to cut the food so it wasn’t big chunks of pepper or we also had to cut The chicken up into smaller squares and cook it.  It was so much fun!

In French class with Mrs Chard we learned the basics of French like hello and goodbye we also learnt our french names .

In PSHE we have learnt to stay safe online by following the SMART rules and  we also learnt about changes in the body with women.

Music we have been learning how to do a very hard but fun song and we have learned  about different notes, crochets and quavers.

We did Sports day but sadly we didn’t get to do sprints.  The scarecrow was fun if you don’t know what it is then you have to cover a person in clothes and get them back to the line.

Computing we have use moviemaker to edit our rotten Romans videos and we used documents to make our script for the Rotten Romans.

In Science we left different flowers in food colouring in different places to see which would absorb best. It was blue and we did journal’s about a plants life cycle.

In Art we have learned about Alma Thomas. We are learning by doing a piece of art of the school field and we also did a colour wheel to learn how to mix colours with primary, secondary and tertiary colours. 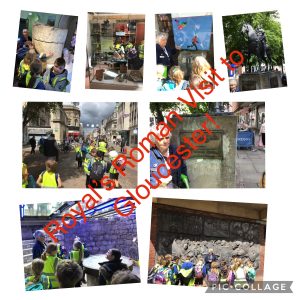 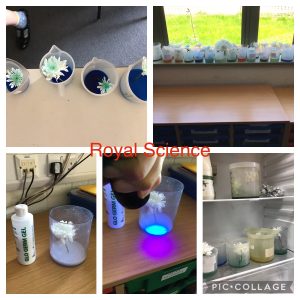 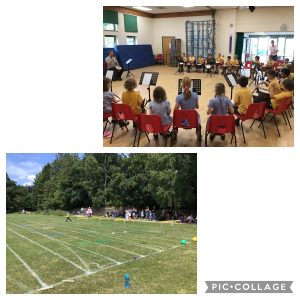