Maths revision is a thing we do in the run up to a test. It’s basically when we learn a new piece of maths and when we finish learning it, we see if we can remember how to do it by getting a sheet of math revision. This term we did algebra revision because we did some algebra…just like c=(20×1)

In math we have been doing roman numbers this term. It has required lots of hard work and lots of team work with our talk partner.We learnt a lot like X=10 V=5 L=50 C=100 D=500 I=1 and M=1000.We did converting Roman numerals into are numbers.example:XXXVI=36.

In PE we have been doing a lot of rounders.Rounders is very fun but also really hard.We have done some bench ball which is where you have two teams and it is a bit like dodgeball.In rounders we normally do a lot of year 5 against year 6.We also did running races a bit like sports day!

In PE we have been doing bench ball. When we played bench ball one person had to stand on a bench and the team had to throw a ball to the catcher and it repeats.  When you get all of your team on the bench, then quickly sit down. Then you  get 5 points and the losing team gets 3 points.

We have also done sitting down hockey. You had some wheely boards and then we had small hockey sticks. There were four teams. Each team would grab a board and a stick then you would have two goals for each team and they would have a small ball and everyone kept falling off the boards. It was funny. In PE, we have been doing rounders.

In the morning we do games on the field or playground.Every term we have a new sports team so they can set up for our activities while the rest of the class run around the track 2 times.We have done football,rugby,hockey,netball and hand ball.Sometimes we do cross the golden river, chaos tag and capture the flag.

In SPaG (Spelling, Punctuation and Grammar) we have been collecting words to add to our writing.We have been learning a mnemonic to remember

We do SPaG everyday in the afternoon.We are all getting better at SPaG because we do it everyday.

In spelling we do a lot of spelling; silent spells and sound association.Which is when we have a few words..    This is what it looks like.

We have done lots and new  different words which we didn’t know were in the dictionary!

In science we have been learning a lot about the human body. We have learned about the heart and veins, also the organs.Did you know that the blue veins are deoxygenated but when you breath in there is oxygen pumping up to your heart in every single breath.The heart is also a very important muscle and the heart beats 100,000 times a day and 4,800 times an hour. Also the stomach is not in the middle of your chest. It’s actually to the top side of your chest.We were all given an elicitation sheet of questions about the human body asking questions such as what are veins and what are organs etc. We also watched this video about the body and we learnt a bit from that video.

This is our class one. We took it with a binhole camera (made out of a bin) with a massive piece of photographic paper. It took 40 seconds to take. Up at the top of our school field.

In art this week we have been writing about Sybil Andrews. We were given a picture with three horses on it and it looks like they are working horses. We wrote about the form and how the medium is linocut.This picture is called Soil done in 1934.We also looked at another Picture by Sybil Andrews and how it looks like a tractor in a field with birds around the tractor and this picture is called Wings 1978.

For another picture we did a study on Peter Clark.We talked about the mood and the form of how Peter Clark uses collage and he uses pieces of newspaper, old maps,bits of old books,magazines,coloured pieces of scrap paper.Once we had done all of the writing about Peter Clark and Sybil Andrews,  we started with a sketch of a rainforest animal of our choice.We had 2 attempts. After we had done our sketch, we had to draw shapes in a sketch and label where colors went.Back in 2nd of May 2022, we did experimenting with different collage techniques where we did big ripped- is where we ripped big pieces.We also did -rip small- is where you do the same as big ripped just smaller and ripped lines is where you rip lines.We did cut squares and cut line where we cut little lines and lots more including cut triangles,cut circles,folded pieces of paper,scraps.

In English we are getting information about The Rainforest animals.The animals you could pick were a Jaguar,Sloth,Snake,Macaw and other rainforest animals of your choice.

In the English books we have been collecting information of where they eat,live and their lifestyle.We are practising relative clauses on the animal you picked here is an example:The jaguar,who had sharp teeth,sniffed out her\his prey.

Also, another subject we studied was about a Raven.We started doing a poem and making a scary story.We got lots of facts about the raven to write the poem and a scary story.

We do a class read at the end of the day or after break.The book is ‘The Boy at the Back of the Class’.

In geography we have been doing maps of where the rainforest is and where different countries are. For example Australia and Brazil because we were reading ‘Journey to the River Sea’. We have also been doing  maps of where Mexico is because for history we have done Aztec and Maya 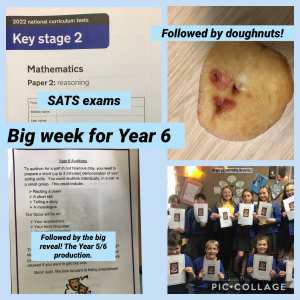 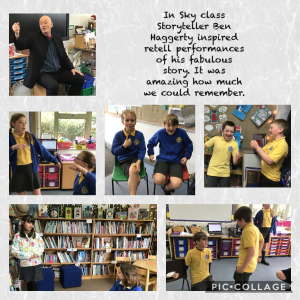