In Royal Class we have been very busy! Last time we did indoor PE we did the spring board and we got the apparatus out and we were doing front flips onto the crash mat.

We have been doing PE with Mr T and when we did the athletics we got to do vortex, discus, tennis ball throwing with 500g  balls. Our class books have been Land of Roar, The Lost Spells, Secrets of a Sun King, Podkin One Ear  and now we’re doing The Explorer. We have also been doing dictation after break. We do three sentences and check our writing for spelling mistakes and seeing if we got our spellings and punctuation right.  In the morning we do X table practice on the whiteboards and then doing dictation after. A few weeks ago we made houses with hot glue guns and wood and tested them against the hose. We also got to use saws as well.  Last time we did rehearsal we got to dress up in our play costumes. Me and some of my friends are really nervous because we have to perform in front of the whole school 2 times and then in-front  of parents 3 times!

When we read the Explorer and it’s a nice day we go outside on the logs and we sit on them while Mr Ricketts reads it to us and we get to run around the track after he’s read a chapter or 2 chapters if we have enough time. We also did a narrator script for a documentary about rainforests and before that we watched two documentaries and we got to collect some words and facts and things like that and put them in our magpie books to put in our narrator’s script.

In Science we have learned about the digestive system and we got to make a model of what happens to our food when we eat and how it goes though us. We used bananas and crackers. It was so gross but really fun!

By Andre and Oscar 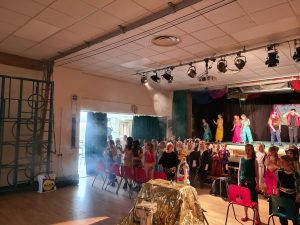 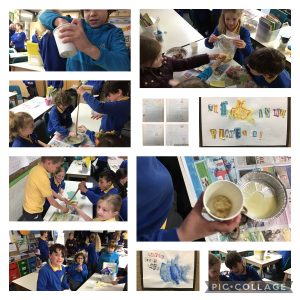