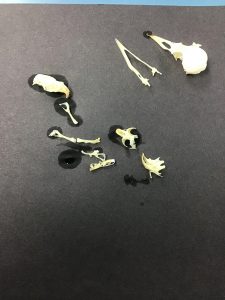 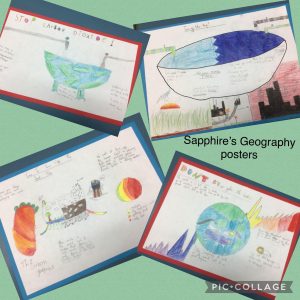 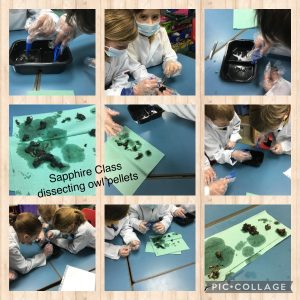 Our week started with our visit from the storyteller as usual. This term he has split us into 2 different groups. Before lunch he teaches stories to the Y4 group and then after lunch he teaches different tales to the Y3 group. Some of the stories the Y4 are learning are a bit gruesome and not for the Y3s at all! This week, the Y4s learnt a Viking creation myth and the Y3s learnt about Chinese New Year.

Each week the Y4s have drama club where they are rehearsing the spring production of ‘Aladdin’. In class we are all busy learning the songs and helping each other out with learning lines and actions.
Art
Over the past few weeks we have learnt how to do a technique called wax relief. You need crayons, paper and paint. First, draw a pattern/picture onto the paper with a crayon (we found that the lighter colours were most effective). Next, water down the paint a little bit and paint a layer across the drawing. What should happen is called wax relief. Anywhere there is a crayon mark, the paint will not take and anywhere there is no crayon mark, the paint will take. We did quite a few tests to see which crayons, paint and paper colours were most effective so we know which ones to use in our final piece. We have also started looking at creating our own slogans for our posters e.g. “later is too late”.
English
https://www.youtube.com/watch?v=A8ri9nw6LA4
Using the music from the link above, we have been learning a rap by Karl Nova called ‘Famous’ and a famous speech from Henry V by William Shakespeare. It has been quite hard getting in time with the beat, but we think we’re pretty much there with it all. We’ve also looked at some of Karl’s poems. The Puddle is all about what it’s like when you feel mistreated. We are writing poems based on our own experiences just like Karl does.
Maths
We have been looking at multiplying 2 and 3-digit numbers by a single digit. It has been hard getting used to a new method; some of us found it tricky when we had to multiply large numbers because it could get quite confusing with how to lay it out. We have had to practice lots before we felt confident with the methods.
Science
Our science lesson this week was probably one of the most disgusting things we’ve ever done, but at the same time, one of the coolest things we’ve ever done. We watched a short video of an owl regurgitating anything that it couldn’t digest; this is called an owl pellet. We were then given a real owl pellet in our groups which we had to dissect! We dressed up in our lab coats, put on gloves and a mask and armed ourselves with tweezers! For about 35 minutes we slowly pulled the pellet apart (after soaking it in water) and couldn’t believe what we found inside. There were skulls of rats, voles, shrews and even small birds along with pieces of their skeletons! It was so cool to see what an owl eats. We had to leave the bones soaking in a cleaning solution because next week we have to be able to handle them and see if we can recreate the full skeleton. See the picture of the bones we discovered.
Geography

We have been working on understanding the impact of the climate crisis on our planet. So far we have researched animals and humans who have been deeply impacted. We learnt that the climate crisis was known about well over 50 years ago, but it is only in recent years that we have started to become worried about it.

We created a temperature graph that showed the increase of the average global temperature from 1960s- present day (see picture). Can you see how in the past 30 years our temperatures have been rising and they are only going to get worse if we don’t stop the continuous creation of carbon dioxide in our atmosphere.
We have also made information posters about how we are overfilling our planet with carbon dioxide. We compared the planet to an overflowing bath. One tap is running at a steady pace and that represents the natural CO2. The other tap is running far too fast and that represents the extra CO2 coming from the burning of fossil fuels and pollution. This is the tap that needs to turn off.