In maths we have been doing mental multiplication and division using the 3, 4 and 8 X tables! We have been using unifix blocks to put them in groups. Say 12 divided by 4 is 3. Before we did division we were practicing our times tables and we were using songs to help us. Our favourites have been Taylor Swift, I’m Still Standing and Adele! We loved singing them!

In English we have been writing our own graphic novels based on Marcy and the Riddle of the Sphinx. We are writing the story in our own version. We are at a stage where our character is on a mission to save their father or their mother.

In class, the story we are reading is Secrets of the Sun King and it’s about Howard Carter and the discovery of Tutankhamun. The main character is Lil and she meets Tulip and Oz.  The go on an adventure to Egypt with Lil (The main character) and they meet Howard Carter in a hotel. At one point after they went outside they got caught by a giant sandstorm.

In History we have been making notebooks of the discovery of Tutankhamun. We have also been sketching some of the artefact objects and labelling them with our ideas about what they were for. This week we have been finishing off our sketch work ready to make our books like Howard Carter’s journal.

In PE we have been doing Handball with Mr Tovey. Well, half of us are doing handball whilst the other half does different little sport games Including chaos tag and cross the golden river.

In handwriting we have been trying to write the alphabet without taking our pencil of the page until we get to X, then we can stop.  It is called the Kung-fu Snail.  We have also been practising writing our names – our full name. We did that in the start of this term too and we have all gotten a lot neater.  We have also been cutting words into syllables in spelling, say ‘return’ we would do this ‘re|turn’ which is two syllables.

In Science we have been Mummifying apples in different ingredients like sand, bath salts, sugar, sodium bicarbonate and we also did one just in a jar. We have been doing this since late September so now the apples have gone really, really decomposed. The one that survived the most was the one that was just in air.  We think that over more time the one that would survive longest would be the one that dried out the most.

On the 1st of December 2021 we did auditions for our school play to see how confident we are. We did different things I read I’m on tea from a joke book and Dylan did a poem called Chocolate Cake by Michael Rosen. Loads of people were really good and we’re excited to see who gets the big parts in the play.  Also, it was really nerve wracking. It was a funny coincidence that Dylan and Oscar did the same poem by Michael Rosen.

With the storyteller we have done a story called Snow White but it’s not like normal Snow White.  It is about a mum and a dad who are very happy and every year they get another son and now have 12 sons even though they always wanted a girl but they never got one. One night the mum went out on the horse to the troll hag’s Mountain and she went up it. The troll hag said “if you want a baby girl you have to get rid of your 12 sons and never see them again” so the mum agreed and she got a baby girl.  She decided to name her Snow White. All of a sudden, the brothers disappeared and turned into birds and flew away and never came back. Then she became sixteen and found out that she had 12 brothers so she decided to look for them.  We are pleased that we can remember the whole story 5 days later!

By Monty Beresford and Dylan Marks-Jones 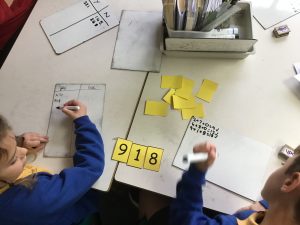 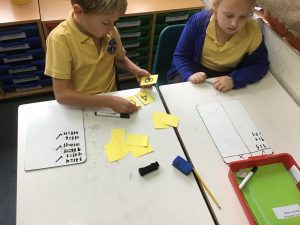 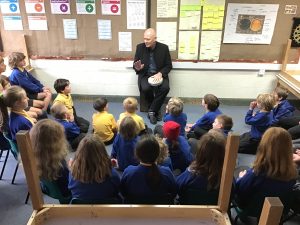