Our new term in Royal class

We have been enjoying our English.  In English we have been doing Marcy and the Riddle of the Sphinx which is a graphic novel.

At the moment in the story Marcy has gone to Egypt to find her Dad and bring him home. Marcy is scared of adventures. We have done diary entries and written parts of the story ourselves.

We have also been doing reading as a whole class and the book we were reading was Land of Roar. We have finished it this week and the end of the book was very good and exiting. We have only just started our new book The Secrets of a Sun King which is about Howard Carter and Tutankhamen.

Mental subtraction which some us have found really challenging but fun. Year 3s have been doing subtracting from 3 Digit numbers and year 4s have been subtracted from 4 digit Numbers.

On Monday the 1 of November, and 2 of them were better preserved  than others. One of the apples in the sugar had fur on it. We think that this is because mould grows more on the sweet sugar.

In RE we have been doing how the world was created.  Miss Tonner’s class and our class (Mr Ricketts’ class) have planted some plants in the water Garden to make our own Paradise.  we put them all in different place And now they are starting to grow. Also we made our own symbols

In History we have been sketching artefacts for our archeology sketch journals and researching about Tutankhamen and how he died.

He died 3300 years ago and he could have died in a chariot crash,

But that would be unlikely because he had a clubbed foot. He had

a small  fracture in his head that possibly came from his neck. This might have been a sign that he was killed or that Howard Carter and his team were too rough when they opened his sarcophagus. He Also could of died from malaria caused by a mosquito bite.

By Immie Wood And Ruby Powell 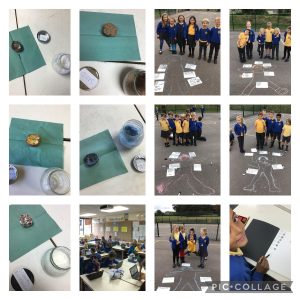