“We learned that the Aztecs and Maya made islands in lakes to grow food on (we looked at primary and secondary evidence).  They were called chinampas.

We were given water, mud and willow for weaving and had to build our own chinampas.  It was slimy, squelchy, frustrating and fun.” Darcy.  (see pictures attached)
We also found out about  Aztec / Maya buildings and made our own out of Lego:

WHY WE MADE OUR MAYAN HOUSE IN THE WAY WE DID.

We made our lego model Mayan house with no windows, because Maya citizens, had their houses, window free. We made a cooking area inside with “wooden” poles holding up a brown cooking pot. This pot usually would’ve been made of a clay mixture, coloured brown. We added a fire underneath because that would have been the expected setting, if you were living as a Mayan. We have an arched door to so resemble the actual doors Mayans would have used in the time they were around. Our house has a thatched roof as the maya would have had. It traditionally have been made of palm leaves, which is what we did. We also included an outdoor lavatory, as the Maya would have,we decided that it would be a good idea to put the lavatory on the roof as to save space, yet this doesn’t represent any historical findings. We added random pieces of lego to represent storage, as the Maya would have had 3 rooms: storage, sleep and cooking food. This is also the reason we added a sleeping area. One thing we have that isn’t on every Mayan house checklist, is a chicken coop, perfect for storing chickens. “We’ve been reading a graphic novel of Tom’s Midnight Garden.  Tom is isolating at his aunt and uncle’s house.  He feels bored and frustrated until he hears a grandfather clock striking thirteen times – he goes to find out why and outside discovers a huge majestic garden in the sun.

We thought about what Tom would see, touch, hear and feel in the garden then thought of all the words we could use to describe them.  Using those words, we wrote poems.” Finley Meyer

And sigh gently into the

Relaxing my toes and

My hand softly brush agents the

Flowers and my hands light up;

A flute in the wind.

In a dull dungeon.

damp under a veil of dew drops.

poke between my toes

Fresh aromas of lavender and rosemary

From my gloomy dungeon 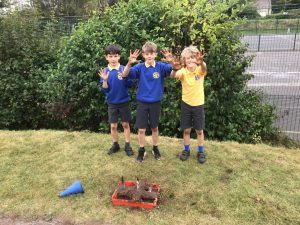 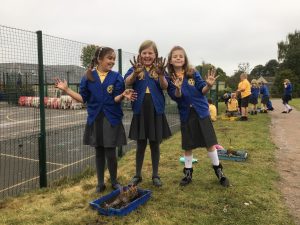 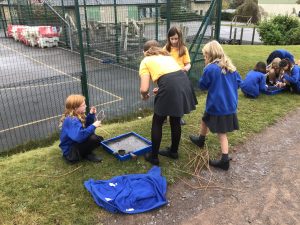