Royal class keep you up to date! 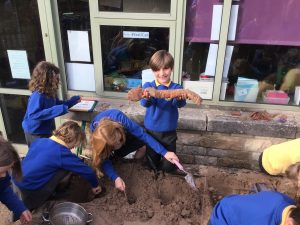 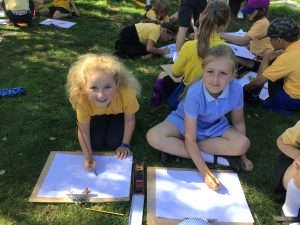 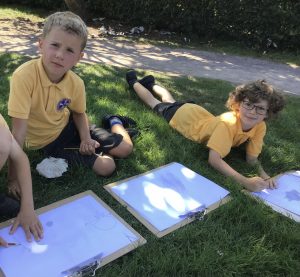 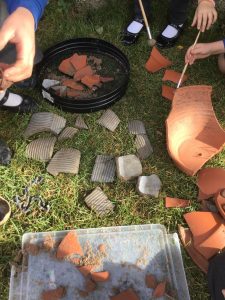 By Evie Horner and Phoebe Nicholls

Greetings from Royal Class!  We’ve had a great start to the term and have been having lots of fun. Here are some of the things we have been getting up to since the start of September.

Through the last four weeks we have been very busy. On Monday’s we have been listening to stories told by a man called Mr Haggety, who came in the afternoon.

In English on the first week we where looking at a poetry book called The Lost Spells by Robert Macfarlane and Jackie Morris. We wrote our own poems in same steps.

In Maths we have being doing place value, problem solving,adding and subtracting.

We have been adding in tens, hundreds and thousands.

0n some Afternoons we have been doing Art, brushing up on our sketching techniques, for example smudging, brushing, doing  things on the horizon line and making further away things smaller and closer things bigger.

In history we have been digging up artefacts that have been buried for us to find. Once we found a doll, a necklace and a series of pots. We have been piecing the artefacts together. The results where a pot, a jug and a spilt bag of fake crystals. We where reluctant to bury them for the next class.

In assembly we are focusing on humility and the values of nature. We have discovered that you should sometimes walk away from fame. Popularity shouldn’t cause selfishness.

In Science we have been testing different weights on parachutes and seeing if they affect the time it takes for the parachutes to fall to the ground.  We remembered to only change one variable to make sure the experiment was fair. Mr R showed an experiment with different temperatures of water where he made them separate and he made a mess!

In spellings we where looking at the ‘shun’ sounds  as in cian, ssion, sion and tion. We also did the spellings gue and que. We have been doing computing lessons, playing on scratch and  logging  on to Google classroom.

In music we have been doing Abba from the film Mamma Mia that we all love to dance around and sing to.  We have also been enjoying big apparatus in PE. We are all looking forward to what we’ll be learning next!