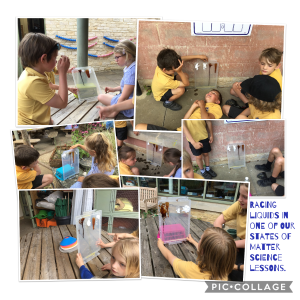 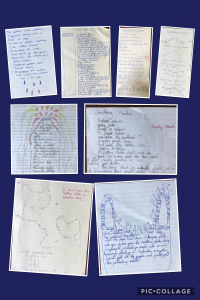 In English, we have been writing a story about plastic. We had the option of making the story with portals or you could make it realistic. We also made poems about the Smoky Mountain Garbage Dump in the Phillipines and how people are making a living there. In the poem we put metaphors and similes and some people showed the poems to Mr Moss. Our main focus this term is plastic which is the reason we did the poem and story. We might send our stories to the writer we were inspired by when we have finished. (Alex)

In Art we are doing Banksy. We are making posters to protest about plastic. We are using stencils to make the posters and we are going to protest about plastic. We have also been studying Banksy pictures. We also made prototypes of the posters. We are looking forward to the art day Ms McCarron promised us. (Sam)
In Science, we have been learning about solids, liquids and gas. We have had some really fun experiments. We have raced several liquids like oil, toothpaste, shaving foam and brown sauce. We also pretended to be solids, liquids and gases. Solids would be tightly packed together and moved as a group. Liquids have to move as a group but have a little gap between them.  (Luke)
In PE, we have been doing sports’ day. We did throwing, running, long jump and high jump. We also did some mini events like hurdles, egg and spoon race and many more. With Ms McCarron we have been doing rounders and we’ve been smashing the rounders balls a long way. I have been really enjoying all the topics. (Alex)