Cyan Report From the Frontline

Cyan Report From the Frontline

By Ted, Olly and Will

A couple weeks ago we were writing letters to plastic polluting companies. We asked them to stop making plastic bottles.  We were typing  facts and questions we had researched about them and plastic pollution. We were writing the letters in our English books and when they were all done in our books, we typed the letters onto laptops. All of us were writing to for example, Coca-Cola and McDonalds and different supermarkets. We had different groups on the laptops and some of us were on desktop computers. We were writing about single use plastic bottles and why they make them and trying to stop making them using single use plastic bottles and straws. We were trying to make them respond to our letters to them. A few days after we finished the letters we were posting the letters to the companies to see if they write back. One of the company’s called ALDI has actually replied to some letters.  They said they would look at our suggestions for changes. It was a very positive response.

A few weeks ago, we did a sports tournament with the whole year 3/4 and it was very fun because we did loads of activities. For example long distance running on the track, hurdles, throwing bean bags in hoops, bouncing on space hoppers, and relay racing. My favourite that happened was running on the track. On  the space hoppers, we did races and that was very fun. Sometimes we would have two goes, sometimes we would have one. On the bean bag throwing it was very good practice for your throw because you had to get it in the hoops that went very big so it was a bit hard. Also, one of the hoops was quite far away and that was two points a throw. This week we did rounders and it was very fun especially the batting because you got to hit the ball and run and if you hit it hard it feels quite satisfying and then you get to run.

Our last English book  was called ‘The Promise’ and it was a book about a girl that lived in a city that was really poor and she was pickpocketing  people. Then one day she met a old lady with a hand bag that was quite big so the little girl tried taking the hand bag. Eventually, the old lady said you can have it if you plant what is in it. So the girl planted the seeds and the grim city turned green. We also planted seeds in class.

Before half term, we were acting out a play it was re-enacting Noah’s Ark. We went in groups of 6 and we acted as the raven, the dove, the builders for the ark because they were Noah’s children and his brother or sisters.

In maths we are learning about money, minutes, months and now time. In English we are doing plastic information posters and then probably at the end of term we will march around Minch on a protest with them and it will persuade people to stop using so much single use plastic.

We forgot to tell you in our last newsletter that it was written by Lucy V, Isabel R and Daisy W. They did such a good job that everyone thought Ms McCarron wrote it!

This newsletter has been written by Ted H, Olly S and Will P.

We hope you enjoyed it!

On behalf of Cyan class. 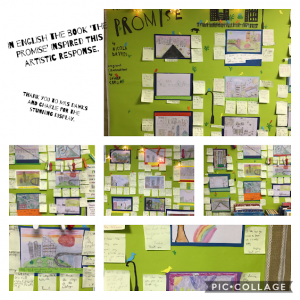 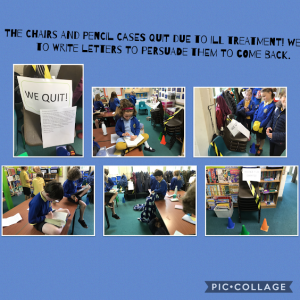 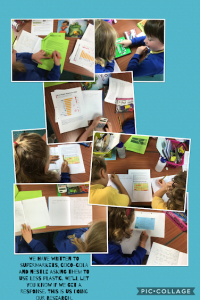