Azure Class have been very busy learning about bees and why they are endangered. They can now tell you why bees are important to the world, what they do and how they do it. They are also thinking about what we should be doing to prevent them becoming extinct! They enjoyed filling in a carousel of activities that helped them learn about bees from evidence presented to them and they also had to infer things from that evidence too.

In maths, they have enjoyed a week of Statistics, which they hadn’t done before,  and they are now loving creating tally charts and pictograms and can ask and answer questions about the data.
In English, the children have been learning The Magic Box by Kit Wright and they been collecting their own ideas for a poem. Some of their alliterative sentences were amazing! We had “wobbling waves wiggling to the wonderful shore” and “A lazy lion having a long lunch”, amongst others!
The children were also very pleased to sea their seascape pictures displayed in school. They were inspired by Van Gogh and the children enjoyed tearing their painted paper to create waves and adding texture with salt and other materials for their boats.
PE on Wednesday afternoon was apparently the best lesson ever because they were allowed to use the large apparatus for the first time this year!
The children have been working very hard as they are trying to show their teachers that they are ready for Y3. It’s working really well! 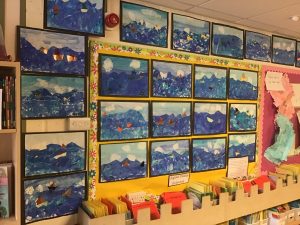