Back in time with the evacuees

On Monday morning, we went on an exciting adventure back in time on a walk round Minchin Hampton (as it used to be written) to see what it was like for evacuees 82 years ago! Talking of evacuees, Marjorie and Patricia Thomas were evacuated to Minch because of the 2nd world war. They came from Birmingham and went to Saint Luke’s school there (it got bombed!). We found their names in the old school registers.  They were written beautifully in ink.  We learned that Marjorie and Patricia were 8 and 6 and they stayed in Well Hill.

We went to the church graveyard and saw some RAF pilot’s graves. They were training at Aston Down when their planes crashed.  They were aged between 19 and 24. Lots of RAF pilots died in World War 2 in the Battle of Britain and the Blitz.  Then we saw where there used to be another butchers, garage, police station, bank, a pharmacy (where the wedding dress shop is now), a drapers, sweet shop called Hilliers, a fish shop and the old post office. By the youth club there are concrete posts that were for the Home Guard to set up a road block in case of German invasion.  Friday Street was called Hero Street on VE Day and they had a street party with barrels of drink and beech boughs for decoration.

As a history lesson it was interesting but it only gets 4/5 stars because it was raining and we got soaked.

In Turquoise class we had five caterpillars which then went through a process called metamorphosis! Metamorphosis is when the caterpillars or any other pupae go into a chrysalid and change into something completely different. The chrysalids took three days to fully form and harden. Four out of our five butterflies came out fully formed and were released into the nature area. One other butterfly’s wings were all crumpled and deformed so we are going to keep that one and feed it nectar (sugary water) 60% of all wild butterflies hatch fully formed; the other 40% hatch either with deformed wings, die or have something else wrong with them. 80% of our butterflies were ok so that’s higher than normal. Ike says, “We were 33.3% better than the wild!”

HERE ARE ALL THE DATES:

We got the butterflies on Wednesday the 21st April 2021.

The butterflies entered their chrysalids on Monday10th May 2021.

We put them in the butterfly habitat on Friday 14th May 2021.

The first butterfly hatched on Friday 21st May 2021. 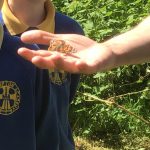 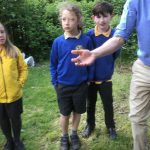 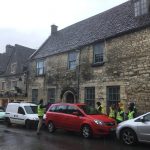 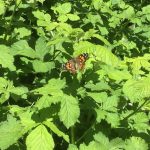 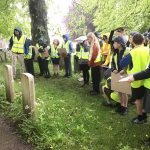 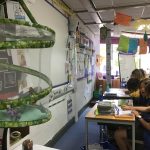