Bears and Banksy, decimals and division….

In Cyan class we have been working on teamwork and how it is important to work together. Our teamwork has been reflected in our ‘ecosystems in a bottle’ which we made around the camp fire in outdoor learning. Also while we have learning how to do teamwork we have played a game which goes like: somebody gets chosen then they say   ‘the sun shines on a friend that…’then you say what you think makes a good friend if you agree you stand up and change places with somebody who also agrees the person who is left in the middle then say’s ‘the sun shines on a person who……’ then the game carries on. We have also practised doing teamwork in English and how to negotiate. Every Friday so far we have been roasting marshmallows around the camp fire (which is in the wild life area). In Year 3/4 we have introduced a listening ladder you start at:

We have been using this new technique to develop our listening skills and hopefully have since improved. (Yes they have says Ms McCarron!)

In maths we have been learning about decimals and have mainly been working on the tenths and hundredth column. One of the first things we learnt was that the decimal never moves .We have quite recently been dividing by 100 and 10 for example 1 divided by 100 =0.01. We have learnt how to explain about decimals in our twist it and sometimes in our explore it. (In a do it you write out the calculation and then solve them.  Twist it: you get given a sentence for instance 67 divided by 100= 067 then you have to say why it is correct or incorrect. Explore it: you get given a question then you have to explore what the answer could be).We have also learnt how to compare and order decimal numbers. A lot of people are growing to like maths.

This term in English we have been studying the book ‘The Promise’ which links to our topic, the climate crisis and plastic pollution.  We have started to make a news-paper report of the robbery in the book and interviewed each other pretending to be different witnesses and reporters. We had the opportunity to be the thief and lie about the crime too. We also wrote inspirational letters to the girl then scrunched them up and threw them into the middle of the class-room allowing other class mates to pick them up randomly, read them and reply as the girl. The class got into teams, picked by the name sticks so it was fair, and voted if the girl should or should not keep the promise that one of the characters in the book set.  Everyone came up with fabulous ideas to share. We all had to work as a team to work out who’s got the best and the least descriptive.  It took a few rounds to agree on whose will be first but eventually we did and it was great!

STORY! In year 3/4 we love story-time and reading time. In class we are reading ‘The Girl Who Speaks Bear.’ It is a great book to read, I really recommend it to everyone in year 3 or 4. (Not so much if you are not keen on wounds) It is an awesome mystery and full of perseverance. Sometimes on Fridays we read it around the camp fire eating our delicious marshmallows!!!!!!!!!!!!!!

In year 3/4 four we are studying Banksy the famous graffiti artist. We’ve started by making stencils of boats. Some of us have made submarines, sailing boats and rowing boats. Once we had drawn around our stencil we started filling it in with stippling, a technique we have developed over the years. We have been discussing how like our other subjects, his paintings are linked to the climate crisis. One of the main ones we’ve been looking at is:

These are only the beginning of his graffiti work. But how do we know he is male? Other questions are asked like is it art and if it is, is it allowed? We assume that he is male according to the words he has used on his twitter account. One of the other things people have discovered is that he is British. The proof of this is; most of his art is in England and when he writes in his paintings in English. Our stencils we made are just a starter and will build up to a final finished result. The stencil shape will be drawn out and filled in with some acrylic paint to give it a lovely dry texture. It might even go up on the wall, we will all be very proud of our work!

Our topic is the climate crisis it is linked to most our subjects, all except for maths. This is one of the most serious crises. Plastic pollution has created some devastating life changing effects on all different types of animals. Fortunately, different countries are coming up with their own ways of solving the problem. Some countries are mixing sand with tiny pieces of plastic to make some bricks/ paving slabs which are more durable than concrete bricks and paving slabs. Others have made a sort of sieve like bucket. It sucks water in through one end with the plastic being separated from it. The remaining clean water would come out the bottom of the bucket, it collects a few hundred pieces of plastic every week! 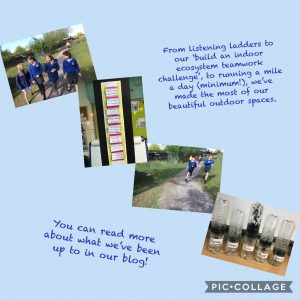