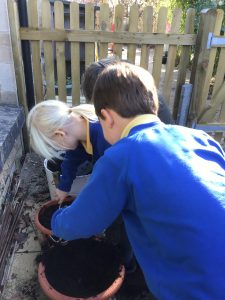 In Azure Class we have enjoyed our first week back after half term. We all enjoyed planting daffodil and tulip bulbs in the sunshine as well as having our first recorder lesson with Mrs Kettle on Thursday afternoon! In English we created lots of extended sentences relating to the question “Are robots and humans the same?” Some of the sentences we came up with using our P4C skills were;

* Both humans and robots need an energy source, but a robot uses electricity and humans need food.

* Humans grow in size, but robots don’t. However, humans get wrinkles as they get older. Both humans and robots get older and their bodies wear out.

* Robots have to be programmed, but humans have a brain and can think for themselves.

* Humans can feel emotions, but robots can’t because they don’t have a brain, so they can’t feel anything.

*Humans drink and eat so need the toilet, but robots don’t need food or drink so don’t need to use a toilet.

*Robots are made, they don’t have babies as humans do. 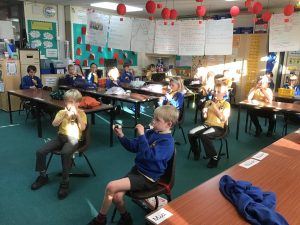