Power of Reading uses a range of high quality fiction, non-fiction and poetry to inspire pupils to read and write.

Alice, Lillith, Eliza & Megan told Mr Moss that their class had been reading a story called ‘Astro Girl’. “The girl’s mummy is an astronaut and the girl is called Astrid. She wants to be a space cadet when she grows up. We decided to build a rocket in class. We said “we’re going to build a rocket”, so Mrs Jackson said “OK, I’ll leave all my plans and we’d better make rockets!”.

“Alice also made astronaut helmets and telescopes for all of us. Mrs Jackson also has one but she isn’t wearing it at the moment. She has a sparkly space lollipop too and a telescope. We‘re going to make a space suit tomorrow.” said Alice, Lillith, Eliza and Megan.

“Are we? Oh, ok! You’ll have to measure each other to know how big to make the suits. But how are you going to make the space boots?” said Mrs Jackson.

“We’ll have to find more cardboard– but we need to work out how to put them over our proper shoes- maybe I could go around my mummy or my daddy’s feet. We need stars from the craft box – if there aren’t any in the craft box, we could bring them from home.  We’re going to fly to the moon- we need two rockets in case one explodes. Actually we need 4 rockets (one each). These telescopes can be trumpets too. We want to go to the moon and we are going to look for moon rocks. Did you know the moon is not made of cheese, it’s made of rocks. Wallace and Gromit were silly thinking it’s made of cheese. We know it’s not made of cheese because otherwise it would have been eaten by now by the astronauts who go there.” said Alice, Lillith, Eliza & Megan.

The next day everyone thought about how to improve their helmets, rockets and space suits.

“We made rockets and space helmets and we made telescopes to look at the moon. We’re hoping to find stars that we haven’t seen before.” said Georgie. I put straws on my helmet to make it stronger and to help me fly without a rocket.”

Lewis said “My rocket has a window so the spaceman can see. That’s me. I’m a spaceman. If I take my hat off I’m back on Earth. There’s a radio on my helmet so I can talk to people on Earth. I have to let everyone know what it’s like in the sun.”

Eli said his helmet has a breathing area so he can breathe, because “there’s no oxygen in Space”. He put a straw on the inside for this reason.

“I put stars and other pretty things on my helmet and on my telescope there’s some stars and pink ribbon. It’s for astronauts and aliens to see – if they exist. I was hoping for it to be pretty” said Lottie. “I put a fluffy bit on mine” said Evie, “because it makes it more comfortable.”

Lilith giggled and showed Mrs Jackson her rocket. “My rocket has a window and I’m going to blast off and find those aliens. They’re green with eight eyes!”

George is enthusiastic about his creation. “Do you know what this brown thing is? It’s a pocket on my helmet. I don’t know what I’ll put in it. Something squishy perhaps. Maybe space rocks. That’s what I got for my birthday – crystals. Guess what’s inside here? Space pasta!”

“I’m going up to the moon and then I’m going to come back so I can have a party with all the stars I bring back to give to my friends!” said Alice.

We’ve been spacewalking to Space music and now we’re going to do some rocket writing. Don’t we look fabulous! 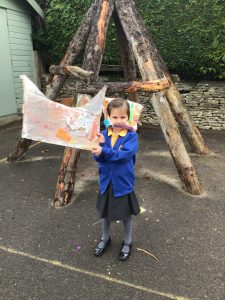 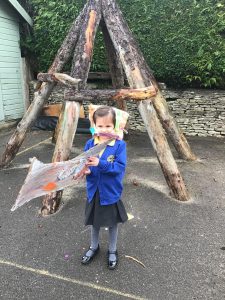 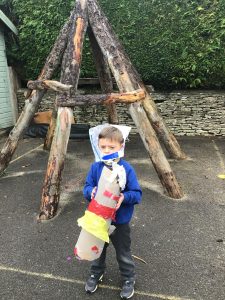 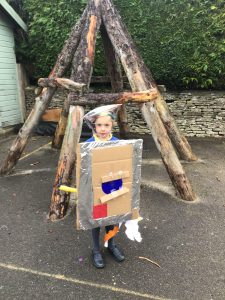 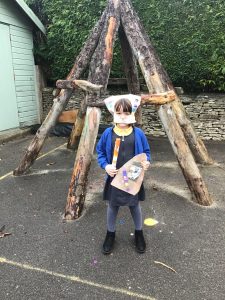 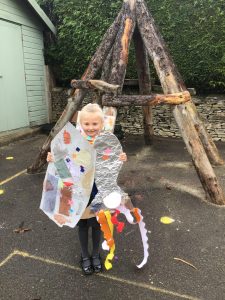 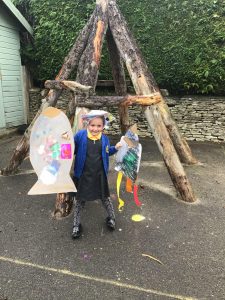 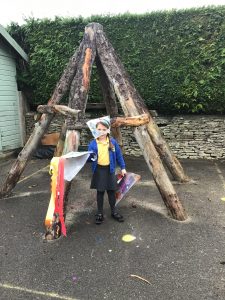 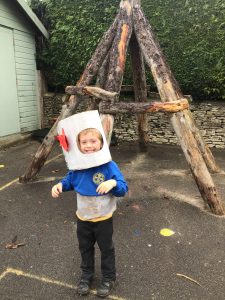 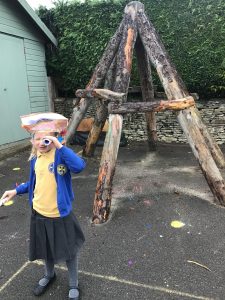 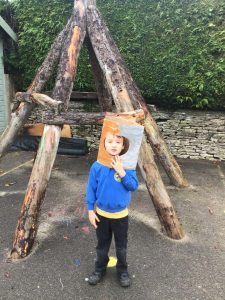 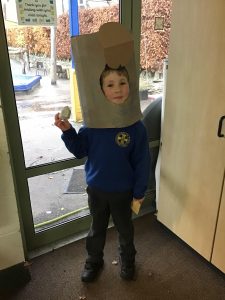 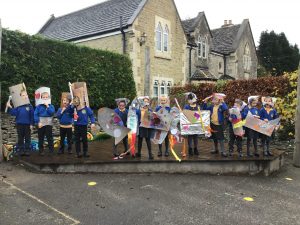