Sky class…. a week of discovery 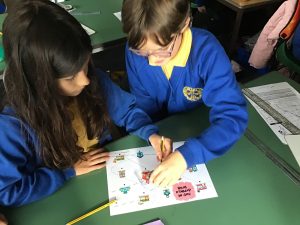 In the last two weeks in Sky class we have been rather busy!
In science we have been learning about water and air resistance. Learning about air resistance helped us when creating our flying machines. We had to balance out the weight with the air resistance. As a experiment for water resistance we modelled different shapes out of clay and timed how long they took to sink. We realised that the bigger surface area took longer to sink because it was harder for the water to rise past it.
All of our flying machines were different but lots of them were inspired by Leonardo Da Vinci’s flying machine. We looked at the Worthing pier bird man contest where people built their own non powered flying machines such as hand gliders and would jump of a pier and see how far they could fly.
In maths the year 5s were learning about factors, multiples and primes. We also did ordering decimals and learned to look at the ones digit then the tenths then the hundredths etc. Linking with geography we did coordinates plotting and finding points on grids.
In English we have been looking at the story of Shackleton. We each became a different crew member and were given a fact file to look at. We wrote an application letter to Shackleton asking to be part of his crew and showing him all of our different skills. Then we were interviewed by our talk partner pretending to be Shackleton and they chose what they think our best answer was.
In PE with Mr R and Mr T we did cross the golden river farmers and foxes where one team, the farmers, would have to grab all the foxes tails in the fastest amount of time. In indoor PE we did just dance where we would choose a character and try to copy all of the dance moves they were doing. Next we did bench ball which is similar to dodgeball but when you get hit you have to stand up on a bench and to get back down someone on your team would have to throw the ball to you.
In art we have been doing watercolour landscapes and looking in detail at the work of Cezzane a famous artist, who paints landscapes using watercolour.
In geography we were looking at maps and finding where places were using four and six figure grid references. We also took bearings using compass’s and made our way round a map of a town taking different bearings at every stop to find some treasure.
By Gabriel Dowie 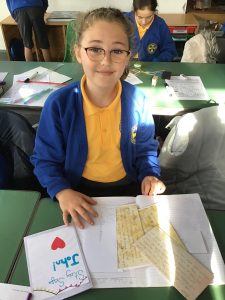 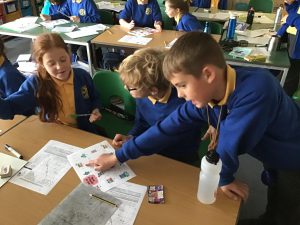