Wow, so much has happened since our last post! Hard work, actual fake blood during the Saxon-Viking battle and tears of joy as we handed our chapters over, on a v 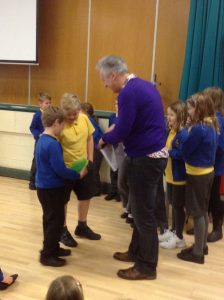 elvet cushion, to John in assembly, to a trumpet fanfare!  Cerys W says, “I found it really fun trumpeting in front of John.” 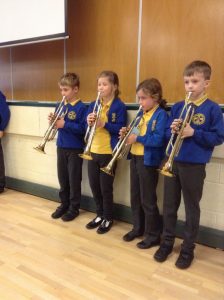 He worked hard, pulling together all the strands from our chapters into his final scene.  The last chapter hasn’t been presented to the school yet…it’s going to remain secret until the final day when the book is launched….Isabelle H says, “Even WE don’t know the ending yet!

To help the pupils with character illustrations, Tom Percival (children’s illustrator and author) came to school and held a drawing workshop for us.  Isabelle H says, “He really inspired us to push ourselves to the limit on what we can do. He gets all the details, even on the eyebrows!” 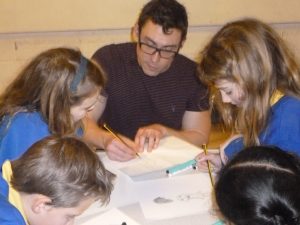 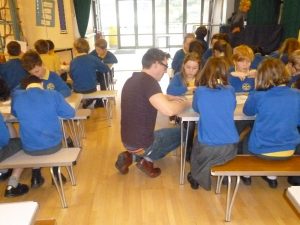 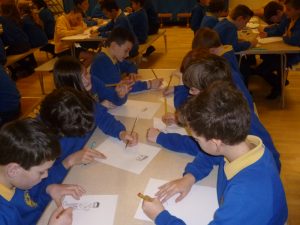 The book, along with the illustrations, were delivered to the publishers (The History Press in Brimscombe) last week.  The publishers were very excited to receive the manuscript and they have praised us for the very high quality of the work.

What an inspirational week!

In Mrs Saeed’s class, John Dougherty worked with the children and encouraged them to use all their senses to describe what might happen in their chapter, which is set in the early 21st Century.  They were buzzing with inspiration!

This week the staff got together to finalise details of the project before we all begin to get writing straight after half term. Ideas began to flow, historical sources were discussed and questions were answered.  We’ve decided to give the project a working title of “A Portal in Time”…much more interesting than “The Book Project”!

We were lucky to be joined by our Patron of Reading, John Dougherty, who said he was thrilled to be involved in  such a unique and exciting project.

This project will see EVERY child in the school contribute to the book, and EVERY child represented as an artist in the Art Exhibition in the village next June (more details to follow!)

…and here’s the film report which BBC Points West made when they visited the school in July of this year.  They filmed a group of pupils in the library with John Dougherty, talking about our book project and reading in general.  It was a great morning and the pupils certainly did Minchinhampton Academy proud!

The Stroud News and Journal attended our school assembly to launch the book project last July.  During this assembly, John Dougherty, our Patron of Reading, read the opening chapter to the pupils to their delight and intrigue, inviting them to write the rest of the book themselves!  He was also able to announce the winners of the competition to name the main characters in the book.  You can find their article here.

Q:  What does a vampire, a pig, a motorbike, four children and some time portals have in common?

A: They are the key ingredients to an exciting book project which all of our pupils are writing collaboratively, alongside our Patron of Reading and reknowned children’s Author, John Dougherty.

This project aims to give our pupils the chance to be both authors and illustrators of a published book.  The project is kindly being funded & supported by many people, including fantastic financial support from the Corinium Fine Arts Society and their head office, NADFAS.

The book will go to print next Spring and be launched on June 10th 2017 in the Market House.  This will coincide with an Art Exhibition of the pupils’ illustrations for the book, alongside work from artists in the local community, which will be displayed in local shops and businesses. (More details to follow!)

Watch this space for updates and news on the project!