Ms McCarron described the start of this journey with our Learning Powers in her blog post, “Yoda for Concentration – Learning power 1 unleashed we have,” on 28 Feb 2016.

Last week I unveiled Learning Power #3 – C3PO for Co-operation, the 3rd meta-cognitive power in our series of 8, to my Y5/6 class.  As before, we began by enthusiastically sharing the ‘Learning Story’ together, and with their Talk Partners, the pupils identified skills from the story that would be useful in helping them to work with others and be co-operative.  They know the format of the unveiling of the Learning Powers by now and are already trying to guess which power, and which character, may be next!

We made a class list of those skills identified and entered into a lively discussion about what makes co-operation important, why it is important, when it might be important and conversely, what might impede co-operation.  Having reflected on what might hinder co-operation, I felt that they had thought deeper about how much they indeed value this Learning Power.

The pupils said that this is the most important power so far for the success of their Talk Partner scheme…..commenting on how the key skills they identified were very similar to the success criteria they generated for their Talk Partners rules. (See previous blog post “Time to Talk pt 2“)

Finally, we all decided that C3PO’s joke was OK, but he still needs some more practice……and perhaps some co-operation with inventing better ones!

The fourth ‘Learning Power’ will be unveiled to the pupils after Easter – “Be Curious“.  Who will the character be??

The impact of using more effective questioning is that children’s thinking is more creative and they have to justify their opinions. Confidence is increased and children then are more able to take risks and ask questions.

Introducing deliberate mistakes is one of the ways improving the quality of questioning in order to unpick the misconception.

Over the last term we have used a number of deliberate mistakes to great effect and huge hilarity. My favourite was the measuring length glorious mistake where the confidence of the children had built to such a peak that they were shouting at me “Ms. McCarron not like that, can I show you how I would do it?”.

This first was the toughest because as a school community we are still relatively new to growth mindset and philosophy for children. It was an emotional roller coaster.

At the end of each maths lesson I ask the children who would like a session in the afternoon to go over what we have done in the morning. During this particular afternoon’s session we were addressing misconceptions which had come up in the morning to do with ‘number families’ – in particular – subtraction.

Q: What addition sum could we do using all 3 numbers? The children had chosen 6, 4 and 10 as our family.

“Now, what subtraction sums could we do with these numbers?”

Some of the children used our rubber sheep. They all had a go at writing a sum on their whiteboards. The children were asked to come up and share their solution.

“Does it use our family of 3 numbers?”

So then we got:

Lots of shots of “No! That’s not right!” and several volunteers to be the teacher. The child who had written this sum up retreated slightly and looked unsure. He asked if he could sort it out on his whiteboard and sat working on his own for a bit.

There was a lot of counting rubber sheep action for the next few minutes. Lots of chat, giving and receiving advice as they sorted it out. Finally 2 of the group got very excited and said they’d got it.

Coming up to be the teacher, their delivery was very effective as the rest of their group hung on their every word in case they tripped up in their explanation. When they had finished with a very successful explanation of:

the boy who had retreated beamed up at me and said “I’ve got the last one.” He proudly came up and shared:

to much ‘ooing’ and ‘aahing’ and checking with rubber sheep.

The next bit of question and answer led the children to the conclusion that there was a rule for adding – you can do it in any order – that didn’t work with subtraction. The second thing they worked out themselves through trial and error was that they needed the biggest number first.

We concluded that we had made 2 mathematical discoveries which we then went on to share with the whole class the next morning.

All in all a very rewarding session. This was a breakthrough moment and with additional practice, these children have been confidently using number families ever since and have understood the concept of an inverse relationship.

The children took proper ownership of the task after the first mistake. There were tricky moments for some as they felt upset at being exposed as wrong but a couple of children were so enthused with sorting out the misconception that the whole group was carried along. They were less polite to each other than they are to me and their questions were very direct and effective. They were very focused on getting it right so that they could come up and be the teacher but they were also good at making sure other people had ‘got it’. A good sense of team. I also feel that they understood it and were engaged more deeply than if I had stood at the front and explained the rules.

This culture of sharing mistakes has built during the term, so that during our measurement unit the children were able to correct my incompetent measurement of height with lots and lots of advice on how to do it correctly and offers of help. From them taking over and trouble shooting my mistakes, we were then able to write our own success criteria for measuring. This has led to some excellent work on co-constructed success criteria which has been fascinating and which Mrs. Hodges and I will share in subsequent posts.

Having unleashed Yoda for Concentration the previous week, anticipation was high for week 2. WHO WAS IT? WHAT WOULD THE SPECIAL POWER BE? All 8 Learning power posters had been stuck up around the classroom but masked for the whole week behind a large question mark! Every day, the children had been speculating. Finally, the moment had arrived.

I work with a mixed attaining group which includes a high number of Pupil Premium children. Part of my remit as a Pupil Premium teacher, is to help those pupil premium children close the gap whilst building their self-esteem. All children can be fragile when they are faced with something new that they know they might ‘fail’ at and when they find that new thing difficult their ‘stickability’ is challenged.

Having had great success with measuring length and tearing their hair out at ‘mistakes’ in my method (see next post from me), our next step was to convert measurements.

10 minutes into converting ‘g’ to ‘kg’, I detected some frustration. I invited the most frustrated child to come and unveil the 2nd learning power.

Quivering with excitement, frustration immediately forgotten, he beamed at the sight of Rey running from a burning starship. We spent a giddy few minutes reading the learning story and talking about Rey’s qualities 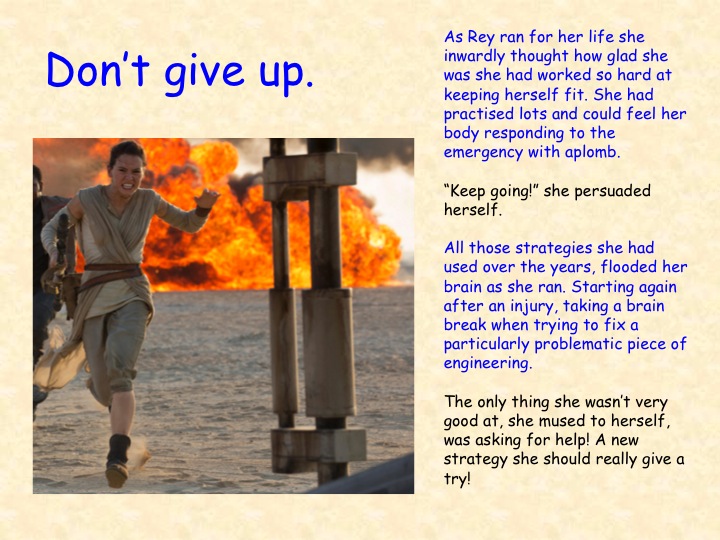 This time, when asked to highlight pieces of the story which might be skills for ‘Don’t give up!’, the children had made accurate decisions within a couple of minutes. 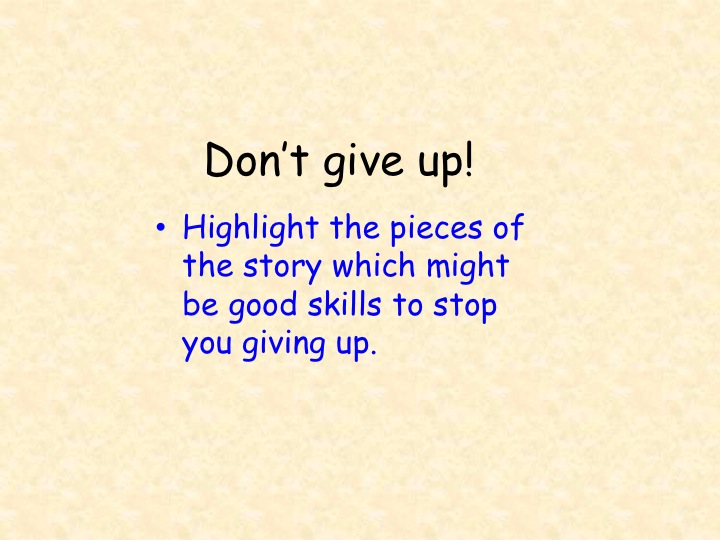 We looked at the bullet point list we had created and the children talked about how we could use Rey’s Learning Power for what we were getting stuck on. During the discussion, without prompting, the children referred back to Yoda for concentration, making the link between the 2 learning powers and how we should use both. 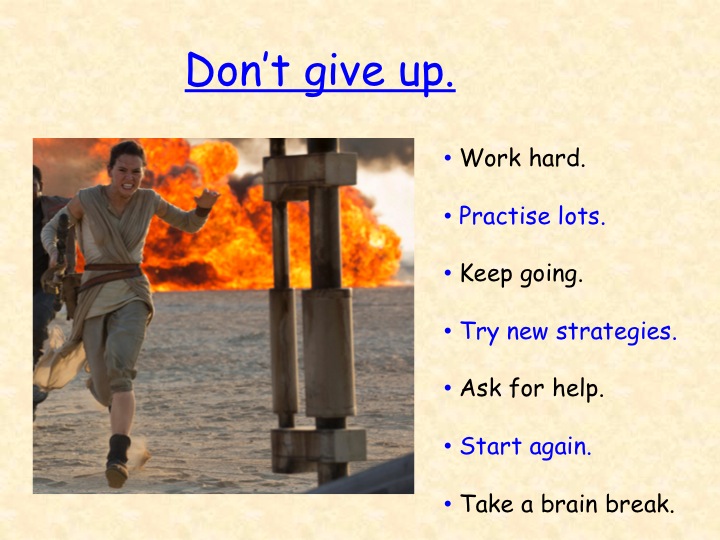 Invigorated, we kept going with our tricky conversions but the mood had changed completely. Our explicit discussion of not giving up lifted the spirits of everyone.

For the rest of the week, we talked about Yoda and Rey and the Learning Powers have become part of our classroom language much more quickly than I anticipated.

I am under so much pressure to reveal Learning Power 3 to my group! However, year 3/4 then became very busy with the school production so it is over to 5/6 and Mrs. Hodges for the next instalment.  Sky class have also been introduced to the Learning Powers over the last few weeks. Time to hear how they have been getting on.